Setting the distance between circles at 3.23 times the diameter results in the spacing shown.

Mars Global Surveyor satellite images reveal thousands of dark spots at the base of Barchan dunes in the northern polar region of Mars. Barchan dunes are crescent-shaped dunes that form in areas where winds blow consistently in one direction, which has the effect of causing the tips of the dune to point in the direction of prevailing winds.​ As seen in the image below, the spots occur almost exclusively on the windward side of the dunes where the slope ranges between 10 and 15 degrees, as opposed to the steeper 35-degree back slope. 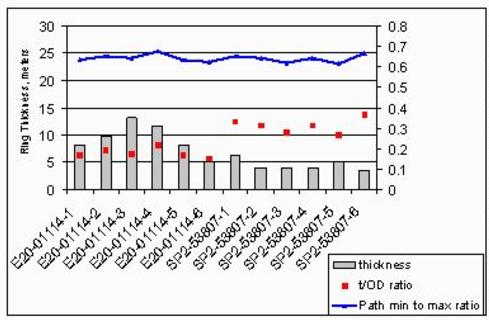 ​It is proposed that the spacing relationship is the result of shading. On Mars the thin atmosphere scatters very little sunlight, while on Earth a sizable portion of the energy reaching the ground is diffuse light. As a result, on Mars any organism not in direct sunlight would be plunged into cold dark shadow that would be detrimental to growth.

This sunlight versus shadow relationship was explored in detail in RINGS, where the rings in twelve Mars Global Surveyor images were analyzed. While the ring thickness (grey bars) and the ratio of thickness to ring diameter (red squares) were found to have a lot of variation, the absorption ratio (light path min to max ratio) was found to have a constant 64% ratio (blue line) between the shortest light path through tree foliage and the longest path.  ​

There also appears to be a relationship between the size of the dark spots, which are believed to be shadows caused by tree-like growth, and the spacing of the spots –– the larger the spots, the greater the distance separating them.  ​ 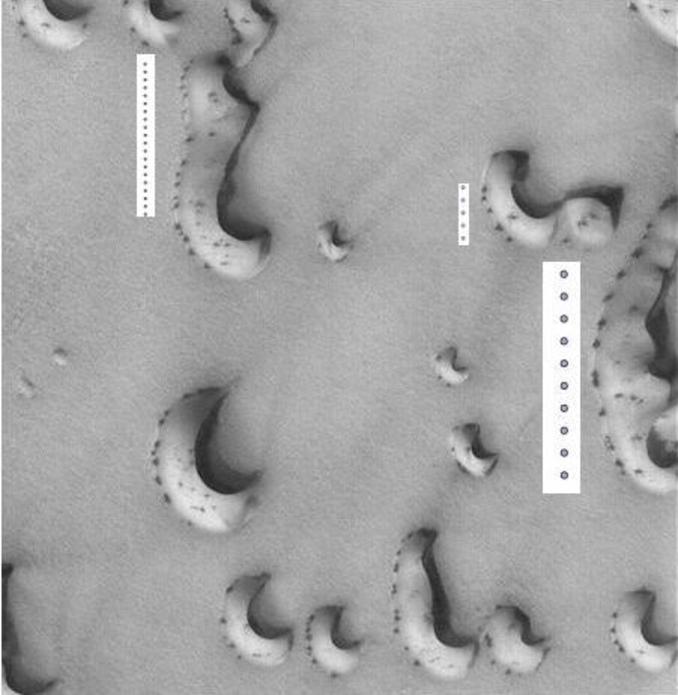 If the relationship between tree shadow and separation between trees is consistent with a shadow zone caused by sunlight with a 10-degree inclination, then the spacing between similar-sized spots in satellite images on Mars should match the predicted. Laying the row of 5-, 10-, and 20-m circles next to the spots in the R16-00306 image, shows that they correlate fairly well with the spots in the NASA image –– with small, medium, and large spots matching the 3.23 spacing ratio. 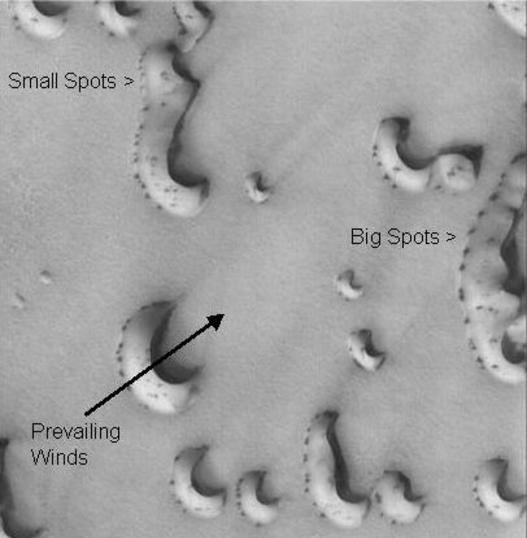 It was proposed that this was a biological feedback mechanism to ensure that enough sunlight reached the back of the plant to maintain continuous plant warmth during the 24-hours of sunlight provided by northern polar summers.

In the same way, the bio-feedback mechanism would favor a tree that is not obstructed by another plant or dune. Any plant attempting to grow near the 35-degree slope of a Barchen dune would be thrown into shadow for part of the day, which could be a factor explaining the lack of spots on the back side of these dunes (reduced moisture would be another since water ice crystals drifting with the wind would be blocked by the dune). On the other hand, sun inclination would only need to be 10-degrees to provide unobstructed sunlight for a plant growing on the front side of the dune.

Using the 10-degree inclination as the minimum sun angle required for the start of the growing season, we can use geometry to calculate the shade footprint of a plant and also the minimum spacing between plants to prevent shading.