As pointed out in the SPACING page of this website, the spots representing plant life appear exculsively on the windward side of barchen dunes.  In MOC Image M20-01664 the same is true, five large spots can be seen in the upper left and a few small ones at the bottom right, whereas on the  back side of the dunes there are no spots.

While there are a lot of other dark features/streaks/spots on the dune in this image, these do not have regular shape or spacing and are most likely not the result of life.  According to NASA the dark streaks/spots on top of the dune are caused when defrosting frozen CO2 exposes the underlying dark dune sand as northern hemisphere temperatures warm each spring. Dune monitoring by NASA has shown the growth of the dark coloration on the dunes; however, the same monitoring  shows NO GROWTH of the uniformly spaced spots at the base of the dunes. ​ 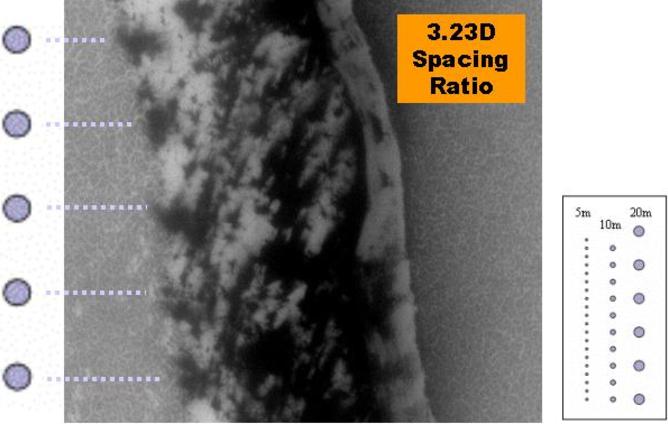 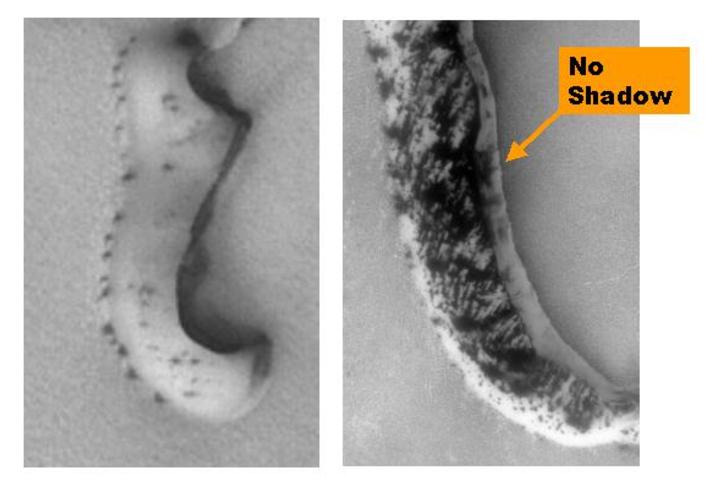 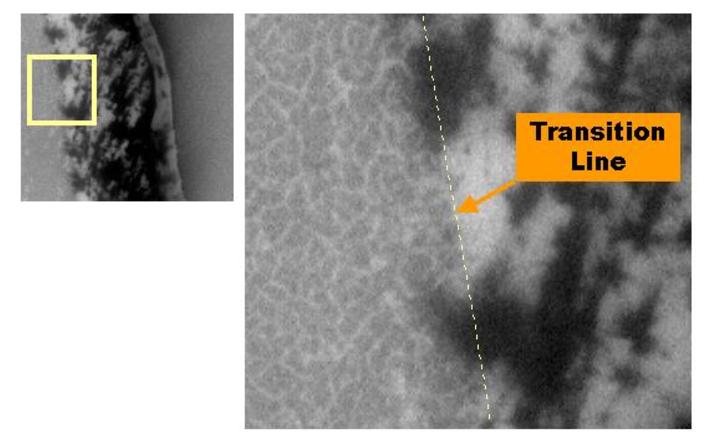 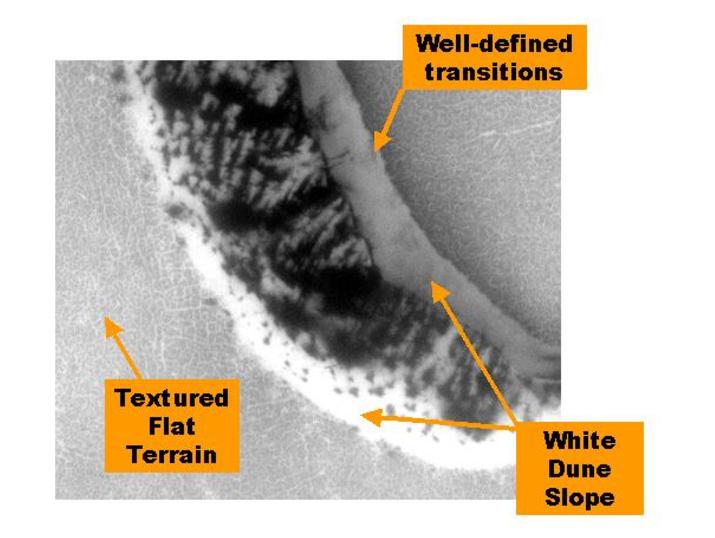 ​On the small dune at the lower right of M20-01664, there are a few small 19-meter spots.   Like the large spots, these also match the 3.23D spacing ratio and span the transition line between white dune slope and flat terrain.

The spots in this MOC image, five of which are visible in the upper left, may be unique among the observed Martian Northern Polar dune spots.  This NASA MOC image, M20-01664, recorded at the maximum camera resolution of 1.67 meters per pixel, offers over 5X greater resolution than other MOC images.   In addition to the higher resolution, the sun inclination angle is over 36 degrees, while most MOC images containing northern polar dune spots have an angle of 15 to 25 degrees and no other image is over 30 degrees. 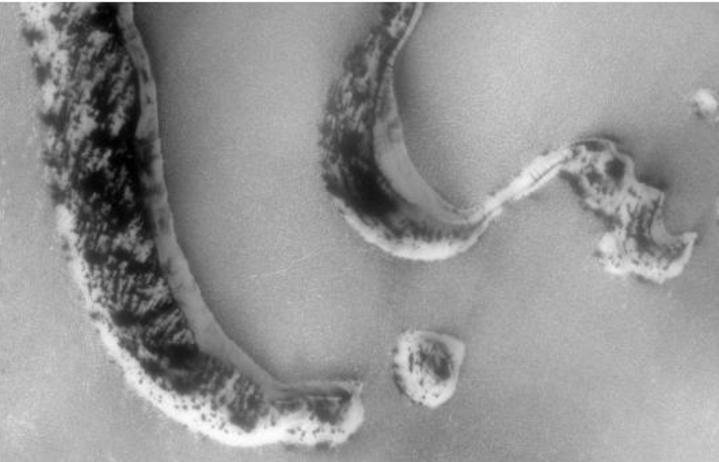 Whereas prior analysis showed that the spots were shadows cast by features (or plants) on the surface, the resulting exceptional detail of this MOC image may have recorded the first DIRECT image of martian life. 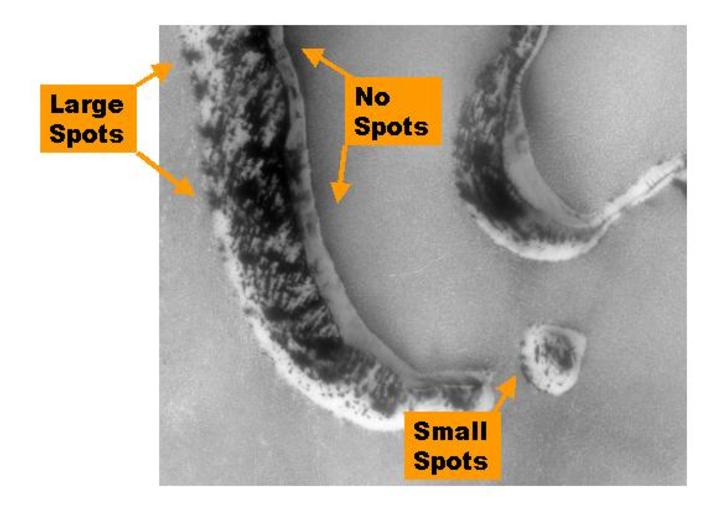 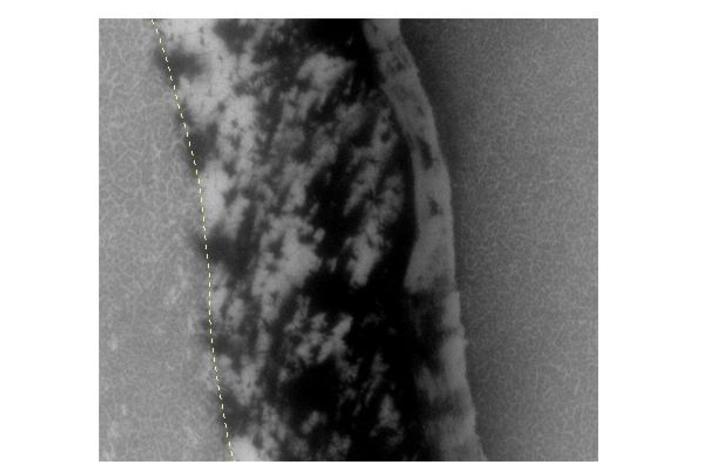 Looking at the upper portion of the large dune, we see that the transition line between dune slope and flat plain is broken by five spots.   These spots are each approximately 40m across and spaced equally from one another.

As proposed in the SPACING webpage, if it is vital for martian plants to receive sunlight without disruption, then the shadow of another plant would be detrimental to growth and thus a determining factor in the spacing between plants.  A spacing ratio of 3.23*Diameter was calculated by using simple geometry (with an assumed 10-deg sun inclination as start of plant growth).  What this means is that a 10-meter high plant would  have a shadow diameter of 32.3 meters and result in 32.3 meters spacing between plants.  A 20-meter high plant would result in 64.6 meters between plants.

Zooming in further allows us to clearly see how the dark spots span both textured plain and dune slope. If defrosting CO2 on the dune, exposing dark sand beneath, were the explaination for the spots, then prevailing winds would blow the exposed dark material further onto the dune, not onto the flat plain. If the spots were shadows then the shadows would show a change in angle at the transition of flat to slope.  A direct image of a plant growing at the base of the dune and spanning the transition line would satisfy all visual evidence.  Since maximum water is available at the foot of a dune in a desert environment, this would be the best location for plant growth.

Image M20-01664 was recorded at the maximum MGS MOC camera resolution of 1.61 meters/pixel and can be enlarged to show much more detail.

The closeup above shows the lower half of the large dune and, thanks to the great resolution, the mottled pattern of the flat plain is clearly visible.  The lack of dune shadow allows us to see the sharp transition between the flat plain and the white of the dune slopes on both the front and back slopes.

The image on the left above shows the typical dark dune shadow (on the right side of the dune).  The portion of image R16-00306 shown is approximately 1km by 1km and at the resolution recorded can not be magnified any further without losing detail.

The image on the right shows the large dune in the upper left of M20-01664.  Because the sun inclination was 36-degrees and the backslope of Barchen dunes have a maximum slope of 35-degree (at least on Earth), as indicated, there is no shadow on the back slope of the dune. ​​

Four factors support the theory that the spots in MOC M20-01664 are direct images of plants the size of trees growing on Mars.

LOCATION at the base of the dunes where in prior analysis spots have been shown NOT to grow with the advancing season, which is opposite the theory of spots being caused by defrosting CO2.

REGULAR SPACING that matches the 3.23D factor arrived at in prior analysis of plant-life avoiding the shadow of another plant.

CONSISTANT SIZE/SHAPE that causes the spots to stand out from the defrosting on the rest of the dune.

SPANS THE TRANSITION LINE between the well defined flat plain and dune slope.  If defrosting CO2 on the dune exposed dark sand beneath were the explaination for the spots, then prevailing winds would blow the exposed dark material further onto the dune, not onto the flat plain.

The only explaination that satisfies all the observed data is that a lifeform the size of trees (24 meters tall in the case of the five spots in the upper left of the image) is growing at the base of the dunes.​