In the above satelitte image of the El Segundo, CA Chevron refinery, located just few miles from the Alondra golf course, the shadows off the oil tanks make it very easy to see the direction of sunlight.  And since the tree indicated is in a parking lot, the crown is visible against the black asphalt (which appears light grey).  This is a clear example of how in satellite images a tree can show up darker than a dark flat surface, and how the shadow of the tree can be darker still.

FOR MORE INFORMATION ON RING SHADOWS

Although it is not possible to identify the exact species of tree by its shadow, five general shapes can be spotted in satellite images and species can be grouped by these shapes.  Conical (pine, spruce), Large/Thin (eucalyptus), Palm (various palms), Round (oak, maple, ficus), and Ring (ficus).​ The ring shape is the most unusual and somewhat difficult to find, although a search of satellite images on Google Maps turned up a dozen ring-shadow images (shown below) in the Los Angeles and Palm Springs area.

MGS Image SP2-50805 (above right) is one of many such images of Mars with dark spots around dunes.

A close-up of Earth and Mars satellite images, and the computer rendered ring-shadow shows the similarity between the three. The tree trunk is visible in the right-hand ficus ring-shadow in Image-A, and is very prominant in Mars image and in the shadow created by the computer model.

A yellow circle has been added to the lower set of images to highlight the tree causing the shadow.  In Image-A the tree is a lighter grey against the darker shadow created by a nearby building. In Image-B there is a curved dark line that may be a mound or heavy roots at the base of the tree. In Image-C a scattering of spots is all that is visible of the modelled tree.


A 3-D model of a palm tree, a thick round-crown tree (similar in size and shape to the tree in the Chevron Refinery images), and a thin, hollow diamond-crown tree were placed on either side of a simple dune shape. The diamond tree is a best estimate based on prior analysis of at least one type of Martian tree.

Using the studio modelling package, light angles were input and the computer program rendered the resulting shadows (see below).

The same is true of the spots found around northern polar dunes on Mars (see images below).

“ The vegetation seen in the satellite photos are tamarisk/salt cedar trees or bushes. Salt Cedar is an invasive species here at the park. The yellow circles on the attached aerial photo clip are in the vicinity of cedar plant...”

Having a confirmed satellite image of trees growing around white dunes allows comparative analysis with Mars MGS images. The northern polar dune fields on Mars have thousands of similar dark spots at the base of white, frost-covered dunes.

For the Los Angeles area ring shadows, it was determined by ground observation that in each instance the type of tree creating the ring was a ficus. In Southern California these trees grow fast and dense, the crown becoming hollow as the tree ages. To prevent the trees from becoming too large and causing extensive root damage, they need to be trimmed back periodically. The resulting thin/sparse hollow canopy will then create a ring shadow because the sunlight passing through the shortest foliage path (B) makes a lighter shadow than the light that passes through the longest path (A). Voila, a ring shadow.

On Mars the ring shadows are much more common, indicating that a thin, hollow crown is a standard tree structure.

One explanation for the evolutionary cause of a thin hollow canopy structure is in response to the thin atmosphere and low temperature of Mars. Foliage must receive direct sunlight to maintain above-freezing temperature. The thin atmosphere of Mars does not conduct/convect warmth well, and it also does not create much diffuse light by scattering sunlight in the upper atmosphere. Therefore any leaf in the shadow of another leaf and not receiving direct sunlight will grow cold and freeze. A tree with a thin/sparse hollow canopy would allow direct sunlight to penetrate to every leaf in the tree, which in the 24-hour day of the northern polar summer on Mars, would allow the foliage to maintain constant warmth for months.

Analysis of Shadows in Satellite Images

The significance of these ring shadows is that they are frequently found around the northern dunes on Mars.  Below are just a few of the hundreds discovered in Mars Global Surveyor images.

Zooming in on the Salt Cedar tree in the Google satellite image (above, left) and the spots in the MGS image SP2-50805 (right), we can see the similarities:  both line up with the sun; both have a dark core with a lighter shadow; and both have shadows that are distorted by the dunes.

1. Shadows line up with the direction of sunlight.

2. Shadows are distorted by ground features.

3. Shadows fall away from the light source.

4. Shadows can show up darker than the object causing it.

To demonstrate these aspects of shadows, a 3-D computer model was created. 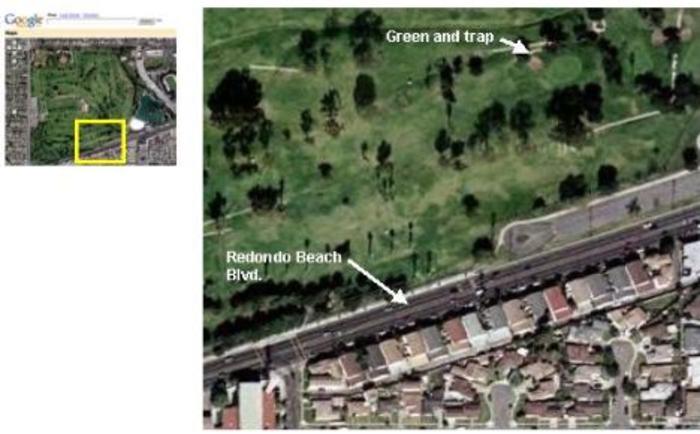 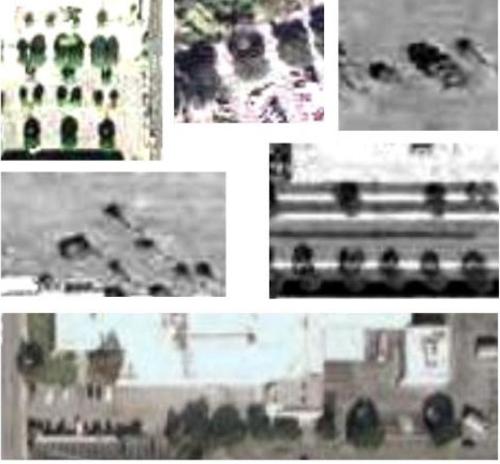 The shadows are elongated in the direction of sunlight (green arrows) and shadows originating on YELLOW lines fall onto the dunes, while shadows on the RED lines fall way from the dunes. 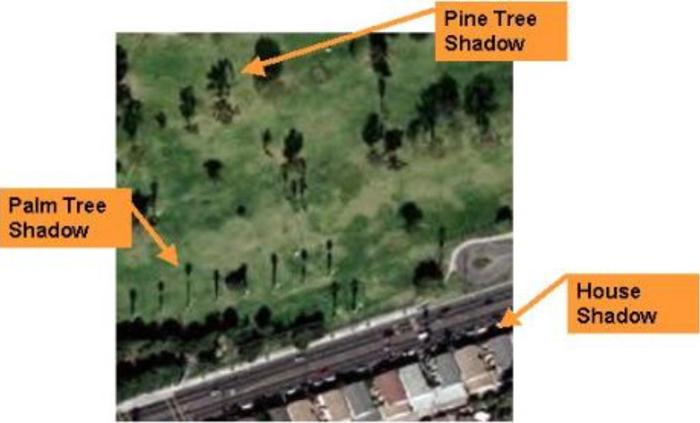 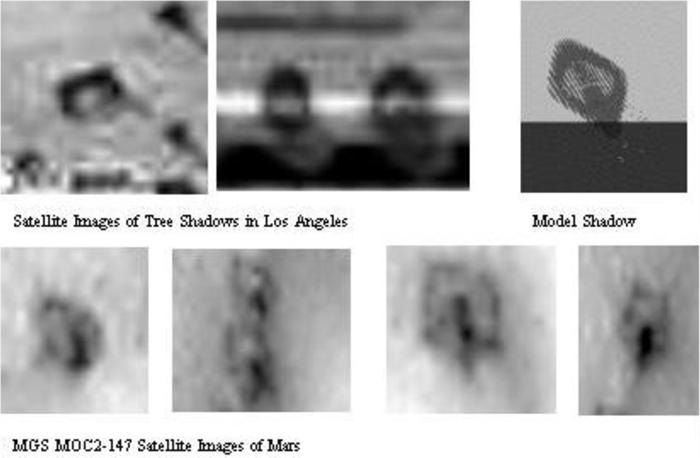 ​In a desert environment, this additional water benefits plant growth.  Note the increase in plant life (curved line of dark spots) growing on the lfeft side of the dune in the satellite image from White Sands, New Mexico, while the right side of the dune is free of spots/plantlife.  The same is true of many northern polar dunes on Mars.

When vegetation grows along a road, dune, or other identifiable feature,  the vegetation shadows will either fall on the feature or away from it, depending on the direction of sunlight. 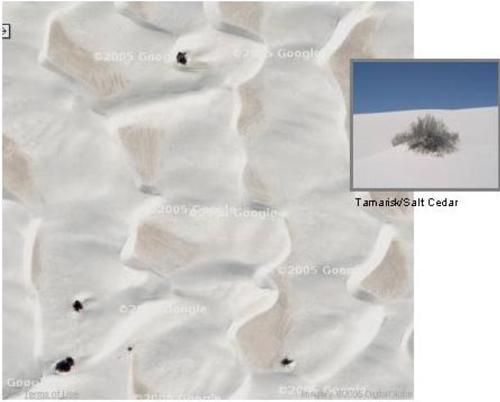 ​On Mars, as on Earth, wind blown snow or ice particles collect on the windward side of dunes whenever wind blows consistantly from one direction.  This concentrates moisture along the windward face.

This periodic cut-back creates the thin/sparse hollow shell canopy that causes the ring shadows evidenced in the satellite images. This temporary man-made condition lasts only a couple months until new growth fills in, and thus explains why the ring shadows are not that common.

The third USGS scientist said the spots on Mars looked like shadows.  Shadows are a very important tool when analysing ground features/objects in satellite imagery.  With shadows you can determine sun direction and angle, or if sunlight parameters are known from satellite telemetry, then by simple geometry the length of shadow can be used to determine the height of ground objects.  And in instances where the object itself isn’t directly visible, the shape of the object can be derived from the shape of the object’s shadow.

In reality you are seeing a view from space of tree shadows on a golf course.  Shadows of trees, buildings, and other things can show up extremely dark in satellite images, much darker than even a black asphalt road or parking lot.  While on the other hand, the green tops of these golf course trees blend in with the green grass and are less visible.  If the palm trees did not cast shadows, we would not even know they were there. 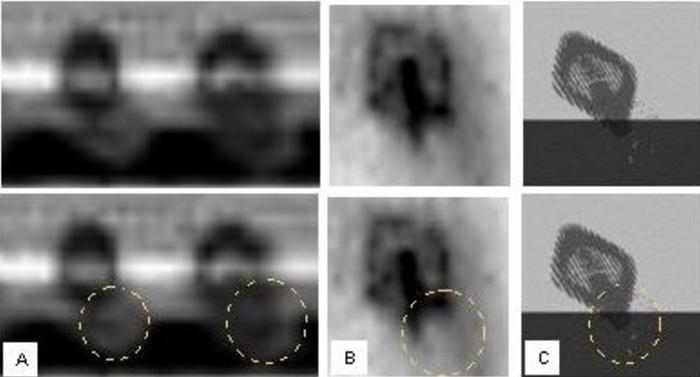 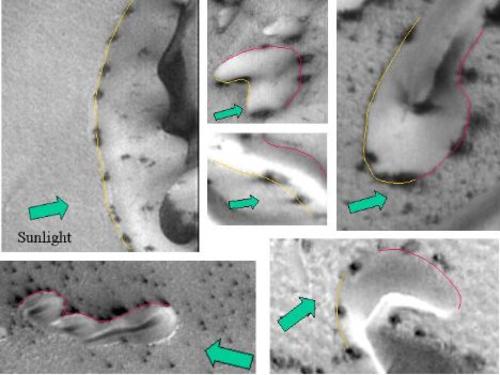 The isometric views of the model (shown above) are identical except for the direction of light, as indicated by the yellow arrows, and the resulting shadows.  Corresponding overhead views are shown below. 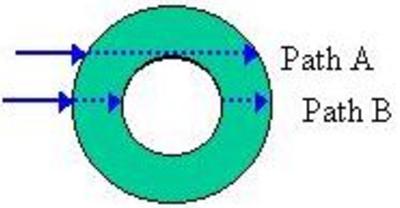 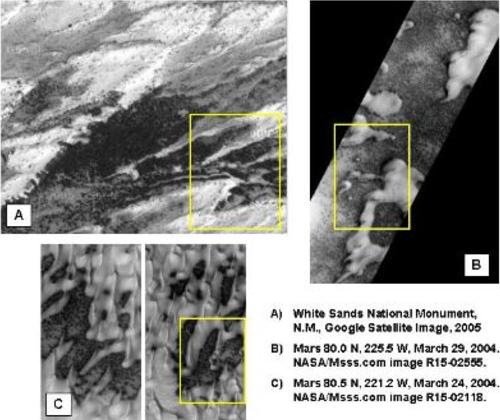 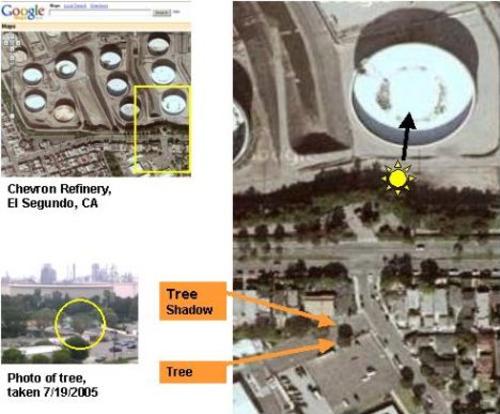 At first glance the image above looks like an airplane view of a golf course from approximately a 45-degree angle.  The dark images are obviously trees, right?