Increasing the contrast of the four images (above) washes out everything except the dark spots, making it easier to compare one date to the next.  If you look closely at the spots at the bottom of the 23 April image, it is obvious that the spots are larger than the spots at the same location in the 9 June image. 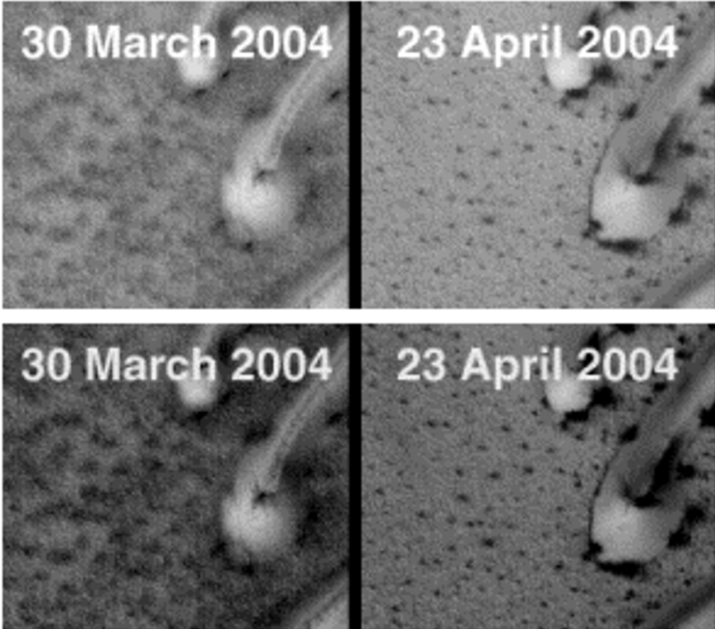 ​Looking closely at the dune at the top of the MOC image (top left below), a few dark spots can be seen in the poor resolution 30 March image, but nothing that looks like shadow spots. However, by increasing the contrast of the image, we see again how this brings out the spots (lower left image).

The location above was not monitored beyond the ten-week time period, however northern polar dunes with spots were observed in satellite images that stretched over a six month time span. These can be seen on the SIX MONTHS web page.

Looking closely at another location in the image, the change of known shadows caused by a crevice in the dune can be compared to the spot shadows at the base of the dunes.  Note how the crevice shadows (they look a bit like rabbit ears) in the April 23 image (second image from left) are a uniform dark, while the crevice shadows in the 16 May image are two-tone and break up into spots in the June 9 image.

According to the daily captioned image releases provided by Malin Space Science Systems, the MGS MOC has been busy over the past several years, documenting the changes in frost patterns that occur on dunes and interdune substrates all over the north polar region of Mars.

The June 11 release states that the 10-week monitoring of dunes at 80.0 N, 237.5 W, shows, “the bright frost that covers the dunes progressively changes from one image to the next, as dark spots develop and frost sublimes away. “ 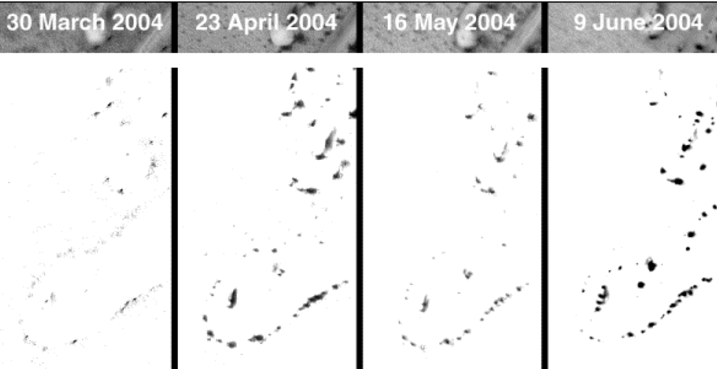