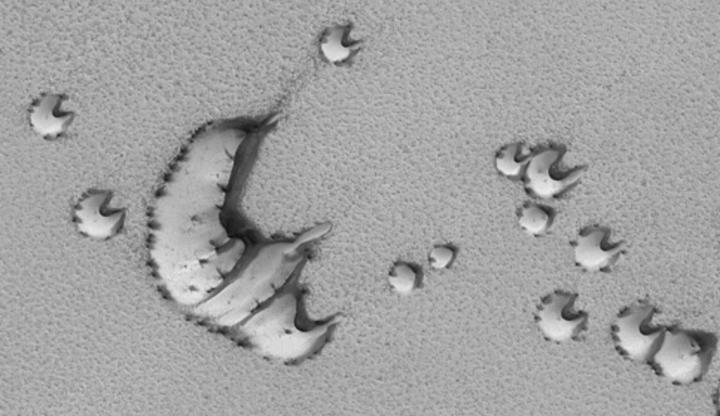 Though most people think of Mars as an extremely dry place, instruments onboard both NASA and ESA spacecraft have detected high concentrations of frozen water in the upper layers of soil in the northern polar regions of Mar, over 50% above latitude 60N. In this water rich zone, the Mars Global Surveyor (MGS) high-resolution camera has also captured images of dunes with spots that bear a striking similarity to vegetation around dunes at White Sands National Monument in New Mexico. Could this be life on Mars?

Scientists at the U.S.Geological Survey (USGS) indicate the presence of life on Mars!

After the three USGS image analysis experts said the spots looked like shrubs, trees, or shadows, they were then informed the satellite images were from the northern polar dunes on Mars. Upon learning that, the experts declined to respond to any further emails. I eventually came to conclude that scientists at NASA and USGS have reputations to protect and therefore will never risk saying something on Mars looks like life, even when they think it does (as my trick exposed). Eventually I gave up trying, and I let the homepage.mac/treesonmars website expire.

Then in 2010, when the Mars Reconnaissance Orbiter (MRO) reached Mars and NASA trained the powerful HiRise camera (5 to 40X higher resolution than the MOC camera) on the northern polar dunes, it returned a beautiful close-up image of what appeared to be trees. Like a broken record, the experts at NASA once again used the sublimating dry ice excuse, only this time they needed to add “optical illusion” in their attempt to explain the image.

Each spring as the sun comes up over the polar regions, the seasonal frosts that have accumulated there during winter begin to sublime away. This Mars Global Surveyor (MGS) Mars Orbiter Camera (MOC) image shows north polar dunes near 76.6°N, 255.9°W in early spring. The image, acquired in June 2002, is 3 km (1.9 mi) across.

Don't be fooled ? it's just an optical illusion, NASA scientists say. The Martian "trees" are actually dark basaltic sand pushed to the surface of sand dunes by sun-heated solid carbon dioxide ice, or dry ice, sublimating directly into vapor, explained Candy Hansen, a member of NASA's Mars Reconnaissance Orbiter (MRO) team at the University of Arizona. In the Martian spring, the sun warms the ice, causing it to sublimate directly into vapor, and the resulting gas dislodges surrounding dust and sand particles. "What we think is happening is that the dark sand is sliding down the bright frosted portion of the dune," Hansen told SPACE.com

Caption: SPACE.com Click on image to go to source page. 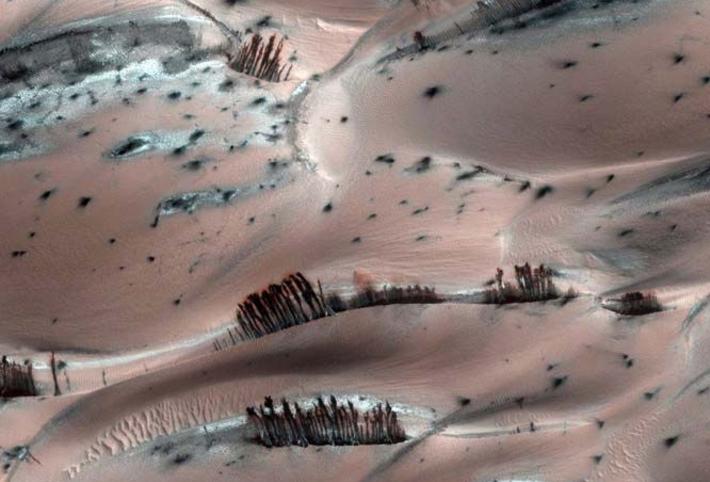 The NASA caption stated the spots and streaks resulted from the sublimation of seasonal frosts that had accumulated during winter, nevertheless, I decided to download the full image to see if there were any fine details that might indicate life. Eventually I recognized that the gray spots appeared to have all the characteristics of shadows cast by mound or shrub-like objects on the ground. To confirm whether it was true or not, several hundred spots were analyzed using five properties of light and shadow — orientation, length versus inclination, shape altered by surface features, intensity, and phase angle.  This resulted in a paper (1027.pdf) that was accepted and published by the Lunar and Planetary Institute in 2004. Those details and around eighty additional pages of analysis were eventually released online at homepage.mac/treesonmars and homepage.mac/moundsonmars.

When the space community failed to even discuss the possibility of the spots being shadows, I asked experts at analyzing satellite images of earth to interpret them. NASA's planetary scientists are great at identifying craters, dunes and other geographical features, but have little or no experience interpreting images of plant life. On the other hand, scientists at the U.S.Geological Survey (USGS) National Center for Earth Resources Observation and Science (EROS), spend their careers interpreting high-resolution remote sensing images of Earth and are experts in analyzing vegetation.

Their detailed explanation for the plant-like features made absolutely no sense. They said, “What we think is happening is that the dark sand is sliding down the bright frosted portion of the dune,” but if you look at the rows of small, ripple dunes at the lower left of the image, you can clearly see they are bright on the right side and in shadow on the left, indicating the sun is from the right. The large mound-like dunes also exhibit this, although the bright sides and shadows are less obvious. The darkest large dune shadow can be found near the center of the image about one-third up from the bottom. Here the “trees” extend up beyond the crest of the dune, not down a slope as NASA claimed. The “trees” directly below them actually protrude through a white frosted zone and into the flat area where the ripple dunes have formed.

This time someone took the unprecedented step to create a website called “treesonmars” to say that the thing that looked like a tree on Mars was not a tree. Why would anyone make a treesonmars.com and treesonmars.net website with nothing on it except the NASA release? Did they want to occupy the site so others could not? It made no sense to me, so I decided to create the treesonmars.org website and put some real image analysis online.

You be the judge — believe NASA’s weak explanation for the features observed in the MOC, THEMIS, and HIRISE images of northern polar dunes, or read some of the detailed analysis on this website and make up your own mind. Be sure to visit the SITE MAP first.

To get their interpretation, Mars Global Surveyor images were sent to remote sensing experts at a dozen USGS regional offices, and they were asked if the spots in the desert images were shadows cast by plant life, dark dust, or something else. Three of them responded.

A member of the Geographic Science Team, EROS Data Center, USGS stated,
“...it does appear that the dark spots are some form of vegetation, since they are on the lee side of the dunes, they are in a cooler and perhaps more moist environment - it appears that there are few on the predominately sunlit side of the dunes. The bottom image looks a lot like some that we see in Iraq and Afghanistan - the dark spots here also appear to be trees or shrubs - very sparse, most likely because of the low levels of precipitation and organic soils.”

Chief Scientist, Earth Surface Processes Team, USGS, replied,
“...best guess, which is shared with one of our sand dune experts, is that the dark spots and streaks are vegetation (probably shrubs rather than trees).”

BRD/USGS/DOI,
“The dark areas look like shadows to me.”

​
None of the USGS experts said the spots were melting snow or dust. Could it be that NASA has failed to find life through the trees?  In their quest to discover microscopic evidence of past life on the planet, NASA's astrobiologists may have overlooked their own macroscopic satellite evidence of vegetation growing around the Martian northern polar dunes.